If you haven’t figured it out from my previous posts on this blog…this family LOVES basketball season!  We watch, coach, play and live basketball from November to March and really most every month in between!  After-all, what’s not to love!?!  As with everything else in life, it truly comes down to what your viewpoint is and how you choose to perceive certain situations and when it comes to sports and basketball its all good stuff here baby!  In, fact Team Gunter believes that there are important life lessons that can be garnered from March Madness and we take this opportunity to share them with you!

University of Maryland – Baltimore County’s 5’8″ point guard, K.J. Maura, showed the nation that great basketball players do not need to be 6-footers!  In fact, Maura admits that 5’8 may be pushing it a bit!  He doesn’t believe that his size is a hinderance to his game, in fact he reported to the Washington Post that his size was actually an advantage.  “My size is an advantage because a lot of guys are taller than me and they don”t expect me to be pressuring the ball.”  Maura told Washington Post reporter Steve Reed in an article posted on March 17, 2018.

You see, Maura and many other tenacious athletes like him understand that accomplishing goals in sports or any area of  life isn’t about appearance at all,  its about taking control of the controllables, thinking outside the box, and not being afraid to chase you dreams;  even if you don’t fit the traditional mold!  It’s not being afraid to be who you are and to recognize and use your God-given talents and attributes to excel in your sport or profession and to achieve your goals!  So, K.J. Maura may never dunk a basketball and swing from the rim like his 6’8 counter-parts but what he can do is play tenacious, pestering defense and use his petite stature to slice and dice past larger, bulkier defenders as the drives to the basket to defeat one of the top teams in the nation in a game that will go down in history!

2.  PLAY WITHOUT HESITATION – GO FULL OUT.

I am constantly telling my players and kids that my biggest pet-peeve is when they don’t do things “full out.”  To me, its a waste of energy to only give 75%.  Why stay in defensive stance for 3/4 of the court only to stand up and let someone drive around you on the baseline!?!  Why spend time cleaning up dinner and washing dishes if you aren’t going to wipe off the stove and counter – its still dirty – and the water is right there to clean it!?!

This year’s NCAA basketball tournament has boasted more upsets that a few from teams that would not have appeared to have been worthy on a paper bracket sheet.  But, no one told them that!  They showed up and played “their” game without hesitation against the very best teams in the country and shocked the nation!  On the other hand, there were plenty of “good” teams that either under-estimated their competition or for some other reason showed up on the big stage and didn’t give the 110% required to propel them to a win!

I am loving the stories of lower ranked teams that suited up, warmed up and stepped onto a floor in an arena that may have been much larger than they had ever played on before and played without doubt – what did they have to lose!?!  What if we played EVERY game that way?  What if we approached life that way?  Confident, assured in our preparation, trusting our teammates, respectful of the gravity of the situation but unaffected by the largeness of the moment – that my friends is when we are teams and individuals are UNSTOPPABLE!

3.  ITS THE LITTLE THINGS (CULTURE WINS).

I can already see my players rolling their collective eyes as I jump up on this soap box again!  Close-outs, Box outs, keeping your hands high and in passing lanes, hedging on screens, Peek and Powerful, constant communication with teammates….all the “little” things in basketball that aren’t really “little” at all.  In fact, this tournament proves that the teams who focus on and execute on the minute details are the ones on the top of the score board and moving forward in the bracket.  They are committed to their defensive concepts and offensive strategy put into place by their coaches and program and are executing it in a precise fashion, even in “big” games – stick with your culture my friends!

It was much to my dismay as I watched my beloved Vols fall to Loyola, my real upset…why were they running and jumping at shooters!?!  Had they forgotten how to close out!?!  Did they not realize that as they went flying by the offensive player for the fifth time in a row that the Loyola player simply did a head fake and drove to the bucket or shot after the flash of orange defender went flying into the bench behind them!  I will be a University of Tennessee fan until the end but come on guys….these are basic defensive concepts….they won’t shoot over you if you stay on the floor with your hands high!  I feel like Coach Barnes may have told them this a time or two!  Stay true to your culture and do better next year! 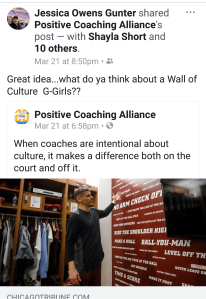 I read an article this week by the Chicago Tribune about the Wall of Culture that Coach Moser of  Loyola Chicago instituted in their locker-room. Is a commitment to these phrases a key to their successful season and trip to the Elite Eight? It was certainly a powerful enough idea that I posed the question to my G-Girls and asked them to tell me what phrases would go on our wall?

The lesson…stay true to your culture and the little things that your coaches (and parents) believe make your program great!  Pay attention to details, I know you don’t want to hold your hands in the air on defense but it may be the difference in a passer taking the look over your head or them feeling as though this defense has completely shut them down and settling for a poor shot or turnover.  Also, pay attention to the culture of how you behave on your team and respond to your teammates – love them, be positive to them and hold them to the high standards set by your program.

4.  YOU CAN’T DO IT ALONE – TEAMWORK PREVAILS

What more can I say…this one speaks for itself!  You don’t see a single team in the NCAA tournament, men’s or women’s, that are doing it alone!  Basketball, just as life, is a team sport and to excel on the highest level you have to trust and rely on your teammates.  The even more important part of this lesson is that sometimes on a team you have to be the role player, distributing the ball to the hot hand of your teammate or taking the charge and other times, your teammates need you to take the ball to the rim!  It’s that balance that makes teams great!

This tournament season, Sister Jean of Loyola Chicago has taught us that even on the court, a little prayer goes a long way! Further, her spirit and love for watching her team play its way through the tournament is refreshing. 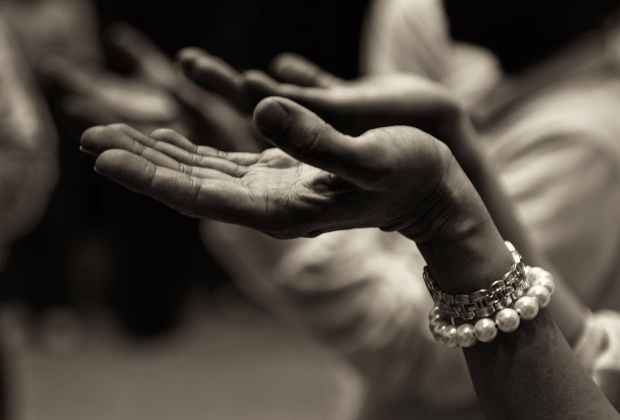 I don’t pray for wins…never have and never will! But faith plays such a strong role in every aspect of our lives, why shouldn’t it in sports as well.  I often pray that my players are safe and play with clear hearts and minds and fully enjoy the game and all the positive attributes that can come from being an athlete and playing this game that I have loved most my life! I believe that training can be largely spiritual, there is nothing like being in a gym alone…I used to have my best talks with God and get in the best workouts in those moments!  When testing your own limits physically, mentally and emotionally isn’t this a perfect time to be talking to God…absolutely!  He may show you things about yourself you never even imagined…giving all glory to Him of course!

So, there you have it….I could go on for days but I’ll try to contain myself.  I love athletics! I choose for athletic experiences to be positive lessons, even when we aren’t necessarily winning!  You can do the same for your teams and families too!  Keep looking for those positives!

2 thoughts on “5 Life Lessons We Learn from March Madness”